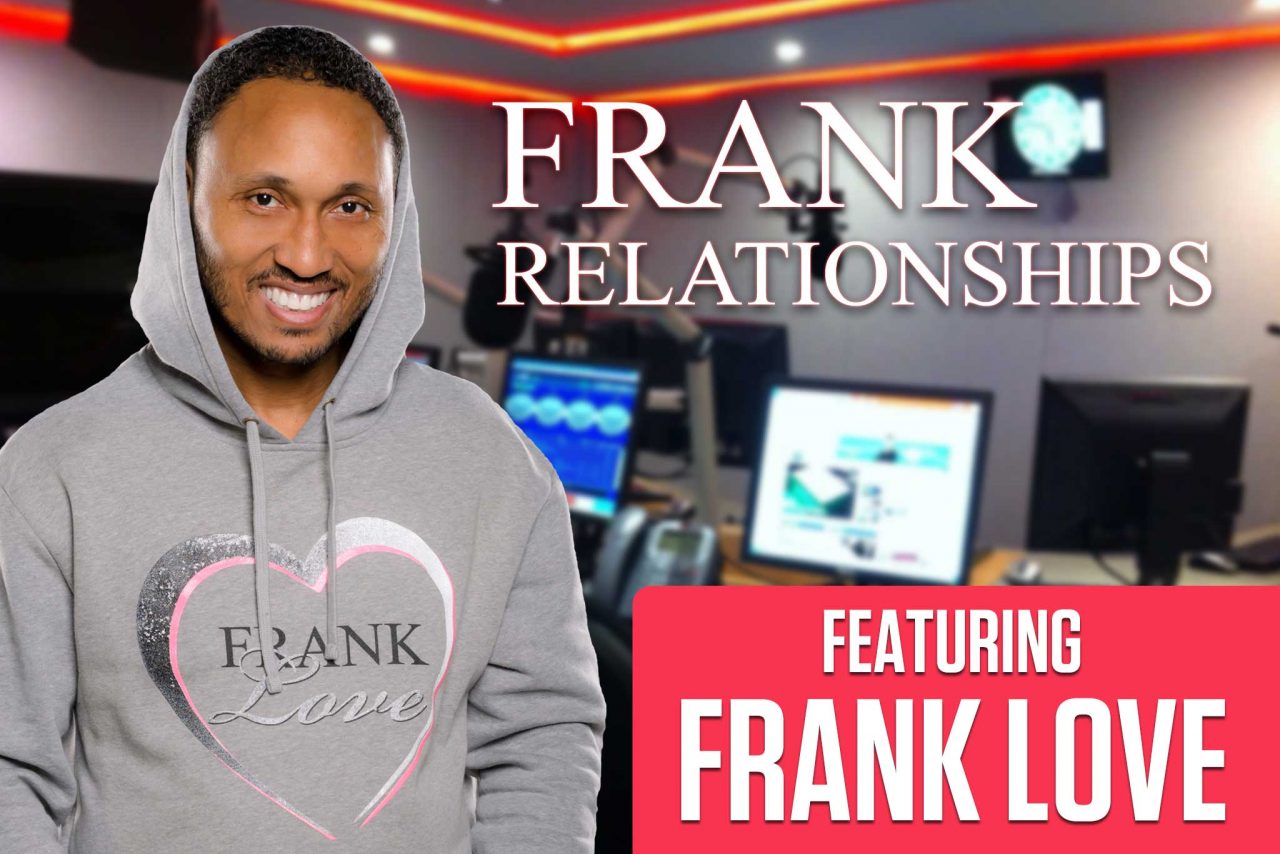 Podcast Episode:
So you suspect your spouse is in a relationship outside of yours? What warning signs do you look for? How do you cope with the initial shock of finding the truth, if it’s true? How do you move forward? Stay tuned as we discuss what most people call “infidelity” with marriage and family therapist Aaron Anderson.

Do you wonder if all relationships are as complicated as your own? Do you often say to yourself, “it shouldn’t be this complicated?” According to our guest, it is … stay tuned as he breaks it down on this edition of Frank Relationships.

Frank: Do you wonder if all relationships are as complicated as your own? Do you often say to yourself, “it shouldn’t be this complicated?” Well, according to our guest, it is. Stay tuned as he breaks it down on this edition of Frank Relationships.

Welcome to Frank Relationships where we provide a candid fresh and frank look into relationships with goals of acceptance, respect and flexibility. I’m Frank Love and you can find me, my blog and my various social media incarnations at franklove.com.

Once again I’m joined by my co-host with the doctorate, Dr. Gayl.

Frank: Good morning. She’s kind of nice to me last week, so I’m pretty clear we’re going to have a difficult day today.

Frank: I thought last–you were kind of nice to me last week.

Frank: Plus I think it’s that time of the week. She just finished exercising.

Dr. Gayl: Exercise, exercise. It sounds like a Gene Simmons type of thing. Was that his name?

Frank: You do your marathons. You got your routine each week.

Dr. Gayl: But I mean, I work out, that sounds more–

Frank: You work out, okay.

Frank: Okay. Alright, she just finished working out. Alright, could there be a painful or costly break-up in your future? According to most relationships statistics, the answer is likely yes, but that doesn’t have to be the case. In my new and now available book, How to Gracefully Exit a Relationship, I reveal what couples and individuals can do to create a more fulfilling partnership or to end relationships that aren’t working in a friendly manner, without suffering the emotional, financial and family ruin that major break-ups can cause.

Yep, it’s a lot more than a breakup book, How to Gracefully Exit a Relationship guides you through every stage of your romantic partnerships, helping you have the tough, important conversations that most couples avoid. Whether you’re beginning a whirlwind romance, seeking to improve your marriage, looking to gracefully separate from your partner or talking to your teenager about relationships, this is the book for you–now available at franklove.com, amongst other places.

If there’s such a thing as a real life know-it-all, today’s guest might be the top candidate. Another one, Dr. Gayl. Not just you.

Frank: Alright. I’ll try to unscramble my brain around that one. He’s an accomplished neurosurgeon and attorney. Put them together and you get a medical malpractice attorney. But that’s not it. He’s also an award-winning underwater photographer that conducts scientific exploratory expeditions. Say that three times. But finally, he’s also the author of the book that exposes women to the truth about a male’s perception of them and what they think, want and actually care about in a relationship.

Frank: The book is, Is it Really That Complicated and our guest is none other than, Dr. Charles Rawlings. Welcome to the show.

Dr. Rawlings: Thank you very much. It’s a pleasure being here.

Dr. Rawlings: Good morning. How are you doing?

Dr. Rawlings: It’s that time of the week, huh?

Dr. Gayl: It’s that time of the week.

Frank: And a sweet heart. Be careful doc. I’ve read some of your book. In fact, I’ve got some things significantly highlighted in here that I think she will start throwing stuff either at you or me about. So, don’t go the okie doke.

Dr. Gayl: Well, Dr. Rawlings, I enjoyed your most recent interview that’s on your website, so hopefully we’ll have a pleasant one this morning.

Frank: Alright, let’s get to it. You say in a relationship, the one who holds the power is the one who cares the least. Before I even ask, you got something to say, Dr. Gayl? You got a response to that?

Dr. Gayl: No, I actually agree.

Frank: Alright, Dr. Rawlings, what do you have to say? Shine some light on that.

Dr. Rawlings: Absolutely. That is one of the cornerstones of most relationships and that’s where some of the power struggles come in and some of the discord. People have various desires and wants and they have various items or activities that they like and they’ve been imbued with a lot of energy. And their partner or whatever the case may be, doesn’t necessarily feel the same way or have the same energy invested in that particular activity or that particular item. So, they’re able to say, “Look–” sort of like a trade-off, “I don’t particularly like that, I don’t really care about it and so for you to be able to do the activity or have the item, you have to convince me to go along with it.” So, they play the skeptic or play the reluctant person and that’s where they have the power.

The other person has to convince them, has to use energy–financial energy, financial motivation or whatever the case may be–to get the other person to agree or to go along with the activity. That’s the person who cares the least–has the most power.

In fact, a woman, while I was writing the book and I came up with that particular line, told me that her grandmother always told her. She goes, “Make sure you involved or marry a man who loves you more than you love him.”

Frank: In order to what?

Frank; Dr. Rawlings, what’s your in order to what?

Dr. Rawlings; I think she’s right. In order to–

Dr. Rawlings: But also in order to be able to–I hate to use the word, but its there, manipulate him into doing–

Frank: It’s one of those things I pay close attention to and how I conduct myself and what I see in others.

Dr. Gayl: In his relationships.

Dr. Rawlings: I think it extends to any of those items. I just use items and activities, because people can understand them easier. But it’s the same in relationships. Absolutely, it’s manipulative, but it’s the way the world works and that’s the way you keep your partners interested in certain ways.

In the ideal relationship where you’re both equal partners and you both have each other’s back, it doesn’t work so much. Everyone is human and people have more interest or more emotion toward certain items and towards their person than the other person does. It just works that way.

To say that the person who cares the least has the most power, I think the person who appears to care the least can appear to have the most power, but when you really peel back those layers, you might find that the person who appears to be the neediest has a significant amount of power too, once you get to a certain point. If it gets to the conversation about breaking-up or if it gets to a conversation about, “Hey I want–” whatever, whatever he or she might want. I’m not so sure that the power play is so cut and dry or that it’s so readily apparent. Sometimes the power can be quiet power.

Dr. Rawlings: I would absolutely agree. In fact, there’s a portion in my book that talks about that. It’s like, the needy person. I use a financial example where in the couple, one of them has sort of advocated financial mechanics to another person. If that person screws up the finances, the other person jumps on them immediately and says, “Look you’re stupid and you did this wrong,” and they’re like, “Well, you told me to do it and so I’m the one that cares the most.”

But you’re absolutely right. Sometimes the neediest person is using it as sort of a passive-aggressive type power play. So, there are all sorts of subtleties in there. It’s like when you say, “appears to be,” that’s all perception–

Manage the Pain; Love the People

Consider Loving Them Because They’re Your Spouse

Register To Join The Call